Kane’s shroud was “carved in wood and fired from a fishermans catapult”.

After the inexplicable chaos of Kane’s sudden and violent death, his crewmates bundle him into the airlock. Too rattled for speeches, they wordlessly propel his remains into the stars. Kane is left to aimlessly wander the universe and the Nostromo rushes on towards its own destiny.

The immediate aftermath of the chestburster scene (such as cleaning up and bundling Kane away) is not shown, and for two obvious reasons. One: to drive the momentum of the film, and two: to probably avoid showing any tenderness towards Kane’s remains. The crew at this point have started to draw together somewhat due to the extreme events happening on board, but they are not (and won’t be) a warm, cohesive unit. Nobody swears revenge for Kane; they just want to get out alive.

The funeral itself seems makeshift. It’s unlikely that the bodies of dead crew are required to be catapulted into space (perhaps they are frozen instead, to await autopsy) but the film obviously presents a very extreme circumstance where the bodily remains, having been exposed to alien spore, may be hazardous to keep around.

Here is the funeral scene as depicted in Dan O’Bannon’s screenplay. Remember, in this version Kane was known as ‘Broussard’:

A hatch slides open on the side of the ship, and Broussard’s wrapped body tumbles silently out.

AN ELECTRONIC BASS DRUM BEATS A DIRGE as Broussard drifts into eternity.

The scene is intentionally minimalist and cold. The electronic bass drum is perhaps a parody of a funerary salute or drum roll.

Here is how David Giler and Walter Hill wrote the scene in their revisions:

DALLAS: Anybody want to say anything?

Nothing to say. He nods to Ripley. She presses a button.

The outer hatch opens. Yawning space outside. Kane’s body shoots out into eternity. The hatch closes.

There are no ominous drum beats, but the scene retains the sense of unspoken melancholy and thinning nerves present in the original. The whole ordeal is, essentially, the far future’s rendition of burial at sea, and it’s the last we see of the ship’s Executive Officer.

But Kane was scripted to return, in both the original screenplay by Dan O’Bannon and in the many rewrites penned by Walter Hill and David Giler. The geography of the scene may have changed between versions, but the setup remained the same. Ridley Scott told Fantastic Films magazine that, “When they’re looking for the Beast, they hear a tap-tap-tapping coming from Ash’s observation blister. When they check it out, it turns out to be Kane’s corpse floating along with the ship and bumping into it. Seems that when he was ejected, he got tangled up in one of the stanchions.”

Here’s the scene from Dan O’Bannon’s script. It takes place near the end of the second act. For clarity, Kane is known as Broussard in this early iteration of the story, Dallas is Standard, Ripley is Roby, and Parker is Hunter:

Standard’s face is tense as he advances up the circular steps. Suddenly, a METALLIC TAPPING SOUND is heard. He freezes. Then he continues up.

The view of interstellar space is spectacular. As Standard comes up the steps, the METALLIC TAPPING is heard again. Standard looks around. Then he sees it — BROUSSARD’S CORPSE FLOATS OUTSIDE THE GLASS OF THE DOME. It is tangled in some rigging, and the movement of the machinery causes the cadaver to tap on the glass periodically.

The others come up the steps.

Broussard’s corpse is blue and bloated where the wrappings have torn loose. Bumping against the glass, he looks like he wants to come in.

STANDARD: The ship’s gravitational attraction must have drawn him back.
HUNTER: (horrified) Should we go outside and bring him in?
STANDARD: No… the risk is too great. Perhaps after we’ve destroyed the thing.

Glancing back, the men retreat from the observation dome. Broussard remains against the glass, peering in with dead eyes.

Here it is repurposed in Giler and Hill’s script. The action sees Ripley searching for the key to Mu-th-r’s control room in Ash’s compartment.

Ripley cautiously descends the stairs to the blister. Carrying a flamethrower.

Looks around the blister.
Satisfied it’s deserted.
She puts down the flamethrower.
Methodically begins to search for the key.
Faint tapping sound.
Then stops.
She looks around.
Sees nothing.
Resumes searching near blister window…
Ripley finds key…
Tapping sound.
She whips around to see: Kane’s disfigured face slapping against the plexiglass.
She stifles a scream.
Drops the key onto the curved surface of the blister.
Fishes for it.
Kane’s bloated face swings in…
She grabs the key and bolts up companionway.

The return of Kane was ultimately cut from the movie, but the production crew did manage to craft its pivotal prop: the body bag.

Sarcophagus. There was an Egyptian element to the Company designs, from the panels on some of the ship’s walls, to the ‘wings of Horus’ Weylan-Yutani logo, and to this burial unit. Interestingly, Egyptian mummies kept their hearts as they were necessary for judgment in the afterlife – Kane’s own heart was likely shredded when the Alien tore through him.

The overall look of it all is part quarantine bag, part Egyptian mummy’s shroud. The body is bound and fastened into a shape reminiscent of a sarcophagi, and the deceased’s name and rank is slipped into a clear pouch under the chin. When supervising model maker Martin Bower had Kane’s shroud carved as a small wooden prop he had these details copied in full, even though we would never see the thing in a close-up shot. 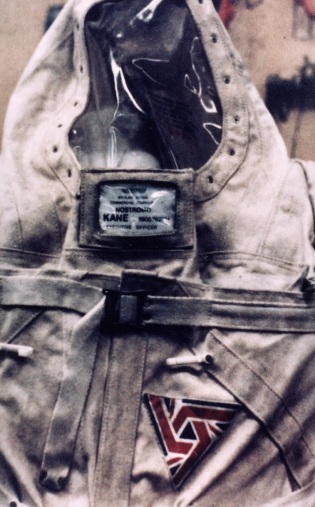 The patch on Kane’s shroud commemorates the establishment of United Kingdom settlements on Mars and Titan.

Finally, the corpse is loaded into the airlock and sent adrift. For this scene, Ridley sketched two figures escorting Kane out of the lock. These were likely Brett and Parker, who were originally planned to have ‘maintenance’ scenes outside of the Nostromo.

Today, space burial is extravagant yet quirky; usually reserved for science-fiction icons and a few peculiar scientists. The remains of American astronomer Clyde Tombaugh are currently racing for the limits of our solar system, and has the distinction of being “the first set of human remains which will escape the solar system to travel among the stars”.

There’s a sense of wonder about that… but in Alien, the space burial is makeshift, emotionless, and somewhat nihilistic: Tombaugh’s ashes are considered to be trailblazing their way into a seemingly infinite frontier; Kane’s bones will be lost in the ever-expanding void. Tombaugh’s chariot, the New Horizons spacecraft, will investigate and analyse foreign worlds. Kane is merely debris.

10 responses to “The Funeral”