“I’m wondering if Alien 3 is in the typewriter?” Bobby Wygant asked James Cameron upon the release of Aliens in 1986. “Not for me it’s not,” he answered.

“I think Fox will want to see how this film does,” Cameron continued, “and if they’re still enthusiastic about, or if they become enthusiastic about a continuation beyond the film that Gale and I made then they’ll have to pursue that in their way. I mean find a writer, find a director, because we’ll be on to something else, I think. Some new territory.”

“But if the money were right?” Wygan teased. “No, I don’t think so,” he answered. “At this point, y’know, the way I work on films and the way my wife -who produced this film- works, is we throw ourselves into the picture right from pre-production through the end of post-production. It takes us a year or two, year and a half to do a film, and that means maybe my career will only be ten or twelve films – you can’t stay doing the same things over and over again.”

“[Another sequel is] entirely in the hands of people other than myself. The only thing I can say definitively right now is: from my involvement as a writer, the story was not constructed with an eye toward another sequel. But then, the first one wasn’t either.”
~ James Cameron, Starlog magazine, September 1986.

Wygan also asked Sigourney Weaver about Alien 3. “It took someone as talented -and crazy- as Jim Cameron to come up with a story that was as good as the first one,” Weaver said, “and I would be surprised if it could happen again. And I have a feeling, if it happened again, that Newt would have grown up and that she would be the one to go on and carry the guns, so to speak.”

In 1995 Carrie Henn briefly mentioned James’ ideas, or framework, for an Aliens sequel: “I know that James Cameron had planned to have Hicks, Ripley and me in Alien 3, to have a family-type thing.” Her feelings about that not happening? “Still, life goes on.”

Lance Henriksen also revealed that Cameron had discussed some character beats for Bishop in a potential third movie: “I also remember Jim saying to me [that] if we ever did another one that what he would have done is probably had that character realize that somebody had fooled around with his brain and make him constantly worried that he was going to do something dangerous. And so I thought, ‘Well, what a nice piece of conflict that is.'” Earlier in 2004 he had said: “Jim Cameron […] was talking about doing another Alien movie. He often pondered about what he might do with Bishop, saying that somehow they messed with his brain to make him dangerous.” 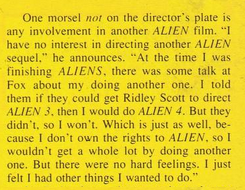 As for James’ opinion on David Fincher’s Alien 3? The swift and off-screen deaths of Newt and Hicks, and the pulverisation (and subsequent euthanisation) of Bishop were two points of contention. But Cameron wasn’t completely condemnatory towards the film. “I actually think that Alien 3 is a pretty good piece of work, in terms of film-making,” he said. “Fincher early on showed what he had as a film-maker, and I think the film has some great stuff in it, some beautiful photography.”

“But,” he added, “it’s hard for me to watch, because it feels like such a slap in the face to the people who have invested in the story through the first two films. I understand his reasons for doing it, but I think the best way to do a sequel is to honour the original and be original and creative in your own way. He was original and creative in his own way, but at the expense of the previous film and what a lot of people might have invested in that story up at that time. It makes it difficult for me to watch the film.”

Originally published in EMPIRE magazine, May 1995.

Carrie Henn and grunts at the UK’s Alien War attraction.

In 1985, Carrie Henn was a 9 year old growing up on a US Air Force base near Cambridge. One day, some strange movie people came scouting for a photogenic little girl. Pictures taken, they returned from whence they came, and she thought no more of it. Then, out of the blue, the phone rang and a man, calling himself a casting director, inquired whether Henn would like to come to London to try out for a film called Aliens. And so she did.

“We thought it was as an extra,” giggles Henn, now a frightening 18, down the phone from her Californian home. “Then they said, ‘by the way, did you know it was the co-star?’ I was like, ‘Ohh…’”

She got the part, and, for someone who had never acted before, did quite a stunning job as the gutsy, lone survivor on the Alien infested outpost. Listening to Henn chat about it now, you get the sense that many of Newt’s indomitable qualities came naturally. For instance, the notion of acting alongside slime-dripping , acid-toothed horrors… “Actually, it wasn’t scary,” recounts Henn matter-of-factly. “The crew were always trying to scare me, but they couldn’t. I never got scared until I saw the movie – even though I knew what was coming.”

What about the violence and swearing – the kind of stuff that is meant to affect kids for life? Henn sighs before replying. “I think my parents might have been a bit worried I would let it go to my head, the language and stuff, but I heard worse at school.”

Henn is still sound of mind and swapping letters with Sigourney Weaver. Although lately they’ve got a bit lax on the correspondence front. The last time they spoke was at the premiere of Alien 3, when the big lady gave her former co-star a jacket emblazoned with “Carrie Henn, Aliens.”

Wasn’t she a bit miffed Newt was killed so mercilessly? “Yeah, a bit. I heard a lot of different stories, there were a lot of scripts. I know that James Cameron had planned to have Hicks, Ripley and me in Alien 3, to have a family-type thing … Still, life goes on.”

For Henn that means a life without acting. She’s attending college and plans to become a kindergarten teacher after university. Life, indeed, goes on…