Fiorina 161’s oppressive and bleak beachside is attended by creaking, derelict cranes and structures, manned only by prisoner labour whenever the surface is intermittently hospitable.

“The E.E.V tumbling end over end as if unguided and out of control, within the pull of Fiorina’s gravity field,” reads one draft of Alien 3. The escape pod burns through the stormy sky, observed at a distance by prisoner Clemens, “gaunt in a way that suggests the years have been filled with suffering of a kind we are never meant to wholly understand … Wind whips at his plastic protection. At his feet, the dark sand is alive with tiny iridescent insects.” The E.E.V turns white-hot, flares through the clouds, and “disappears over the horizon line of a black sea in a turmoil of whitecaps.” Ripley has arrived.

For the crash, a plate of the sea exploding under the impact of the E.E.V. was shot, with the escape pod itself to be composited later. “The director wanted enormous explosions [for the crash],” explained George Gibbs, who headed the special effects team responsible. “Some were as big as eighteen hundred feet wide, with water towers that went one hundred twenty to one hundred fifty feet in the air. It was difficult because Fincher wanted a really rough looking sea and it was nearly impossible to work in those conditions.”

Like Acheron/LV-426 of Alien and Aliens, Fiorina 161 is unfriendly or at least indifferent to its human inhabitants. Grey and grim with roiling stormclouds and rust-tipped mountain peaks, the only organism crawling its surface apart from the few humans we encounter in the movie are swathes of lice, whose presence necessitates that the human population shed their hair and adopt an impersonal and uniform look. Oxen -beasts of burden- are apparently brought in for a lifetime of toil and a destiny in the prison’s meat locker. Fiorina is Hell by night and Limbo by day.

“This is Fiorina, and it’s supposed to look very toxic, so I played around with toxic materials, and I used razor blades and all sorts of tools to get texture. And this [matte painting] had to be so large because they had the miniature [E.E.V.] coming in and turning to crash.”
~ Michelle Moen, Alien 3’s Matte Dept. Supervisor.

In a nod to other cinematic landscapes, matte painter Paul Lasaine added to his painting of the Fiorina refineries [image at the top of the page] distant towers styled after the stacks from Blade Runner‘s famous ‘Los Angeles 2019’ opening shot – details which you’re unlikely to have a chance of spotting in Alien 3 due to the overlapping effects and the diminutiveness of the painted towers. Allegedly, the Tyrell Pyramid structure is also in there, somewhere. An obvious similarity with another cinematic alien world is Fury’s twin suns – perhaps a tip of the hat to Star Wars‘ Tattooine sunset. The shores of Fiorina were filmed on the dreary Blast Beach at Seaham and at Blyth Power Station – perfect for the planet’s monochromatic landscape, and was apparently shot by Jordan Cronenwerth [Blade Runner again] before he left the production.

“It was a terrific looking spot. There had been a colliery nearby and they had dropped all their slag onto the beach. So the sand was black and the water had a real brackish look to it.”
~ Rich Fitcher, Boss Effects Co-Supervisor.

“Deep space on this particular planet is not zip-fasteners and lycra,” explained Charles Dance, who plays Ripley’s seaside saviour, Clemens. “The look is deeply depressing – very gray, underlit and somber … [The prisoners are] a pretty sad lot, but they’ve all managed to survive long-term imprisonment against all odds in this dreadful environment.” For the shots of Clemens wandering the dust-swept planet, a facility set was built on a studio backlot.

“Actually, this script has retained the look of a religious community,” continues Dance. “The men have embraced a sort of strange religious cult in this prison. Some of the prison inmates are homosexual, but they’ve all taken a vow of celibacy, so nobody does anything to anybody. All the costumes are very monk-like, colored in grays and browns. We have these wonderful hooded coats which reach right to the floor, and which are made out of government surplus tents. The look is both monk-like and menacing… [Clemens is] very much a loner, and not at all popular with the other members of the staff.” 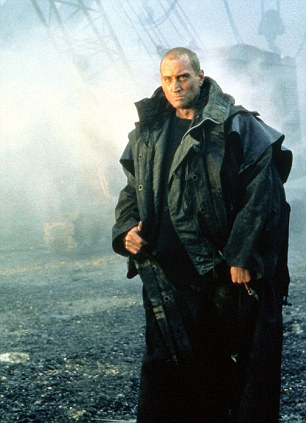 “The movie originally began with me walking along this strange, weird, desolate beach, with a lot of huge, derrick-like construction all around. We were going to shoot it in Newcastle, but FOX decided they couldn’t afford it, so in the end we built this wonderful, great big beach on the backlot of Pinewood. It was very cold, and we had these huge wind machines, so I was breathing in dust all the time. And I was running along this ridge carrying Sigourney, having just rescued her from the crashed ship. The scene was shot over two days, and was very uncomfortable.”
~ Charles Dance, Fangoria, 1992.

Explaining the role of his character, Dance is blunt: “To be honest, the powers that be at 20th Century Fox simply decided it was time that Ripley had a man – that’s my principal role in this picture. We find each other, because neither of us has had a partner in God knows how long, and we’re drawn to each other. Clemens reacts to this pretty nervously – he’s not sure whether he can handle it, since it’s been such a long time for him. The other men on the colony are very threatened by Ripley’s presence, and to some extent, they blame her for bringing this disaster -the Alien- with her.”

The bulk of Fury’s exterior scenes were filmed but ultimately cut from the theatrical release, though they were restored to the 2003 Assembly Cut. These included Clemens discovering Ripley washed up on the beach, carrying her back inside the facility, and the prisoners utilising oxen to haul the E.E.V. from the sea.

“I thought it [the excised intro] made a major difference, because the beach scene set up these inmates and the environment and the fact that the doctor was a loner. All those things were very important, and the fact that you saw the way they worked, and that it was very barren, and it was just these odd moments that they could get outside and that they used Stone Age type gear – those scenes at the front were invaluable to the film. To see her [Ripley] brought into the place, you saw what it was like, you saw all those bugs and other stuff. It just set the whole place up and what it was. And we never had that.”
~ Terry Rawlings, Alien and Alien 3 editor.

For the shots of the fiery refineries shown at the film’s climax, Richard Edlund and his team at Boss constructed a miniature set out of cardboard, foam core and other pieces, Edlund: “From the standpoint of our task on Alien 3, we had to create the Alien [miniature rod puppet], but we also had to help create the environment, so we did numerous miniatures and matte paintings, one of which was the furnace set, which was a pretty nice Blade Runner-esque shot.”

Because they wanted the hellish landscape to have depth, a matte painting was dismissed and a set built with a shoestring budget attached. Forced perspective gave the added depth necessary and the crew smoked up the studio for a hellfire vibe. 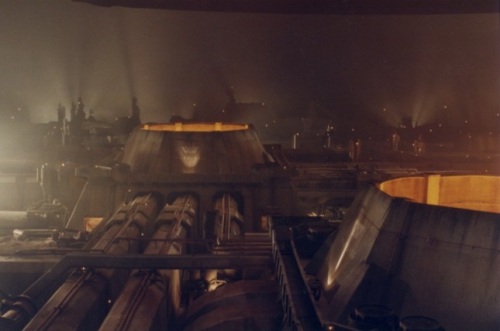 Hell by night. The shots of the smouldering prison facility and its furnaces were inspired by the opening shots of Ridley Scott’s Blade Runner.