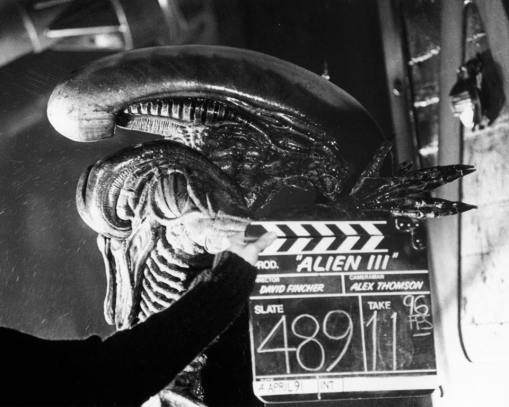 Among the many British crew members working on Alien 3 was a highly experienced special effects technician from London. Understandably wishing to remain anonymous, here he gives an exclusive behind-the-scenes report on the complex, challenging and at times entirely rudderless production that was Alien 3…

Alien 3 was a very silly movie to work on. It had already been going for four months by the time I started, and they hadn’t even begun thinking about making the Alien. The script wasn’t even finished by that point, and I don’t think there was a director either. All there was was a bunch of models of the characters that were going to die – the Alien didn’t get made until five or six months later. In fact, the Alien was the last thing to be considered out of all the effects.

They had done the facehugger which you see at the beginning of the film, because that was the thing they were least worried about. There was another super-facehugger, a clear one, that took us about three months to make, on and off; that was kicked out just after we’d finished it. We also built a huge ox that the Alien burst out of, but David Fincher didn’t like that. Eventually they went back to America and reshot it anyway; now it’s a dog. It was a colossal waste of money.

The original Alien had these kind of pipes sticking out the back that took it away from just being a man in a rubber suit, but creature designers Alec (Gillis) and Tom (Woodruff) hated them, so we left them off. The very first day we took our Alien on set, Fincher said, ‘Where are the stove pipe things on the back?’ so he had us make some foam ones and glue them on. We made them overnight and they were strapped on with string –this is on a multi-million dollar movie– and when we got on set with them he just said, ‘Take them off’. It was extraordinary.

We were a bit worried about him, to be honest, because nobody knew who he was. We knew he’d directed Madonna videos but none of us were particularly impressed by that, funnily enough. He was just allowed to film and film and film, no one was ever there to tell him to stop, but surely once you’ve done 20 takes, you must have something? I guess maybe Sigourney Weaver had something to do with it because she also wanted everything to be perfect.

The way it worked was that we’d start making something for the film and it would be written out, so we’d stop making it. Then it would be back in again, so we’d start making it again – the same thing happened with the sets. (Special effects supervisor) George Gibbs reportedly built this huge set for the ending of the film on the 007 stage at Pinewood, and they changed one aspect of the script so he had to tear it down and start again.

We also spent a huge amount of time and money making an Alien suit and some other guys did the same, making an alien puppet, and the two things just don’t match up, they don’t look like the same Alien. Again, that was because it got to the stage where it just had to be done, so consequently they don’t look like each other in the final movie.

The return of Bishop (the android played by Lance Henriksen) –or Bosh-up as he was called on the set– was a disaster. The one in the final film was redone later in America, but we produced one for our very first day on set with Fincher. He’d already got a reputation for being very short-tempered, and we’d stayed up for two nights trying to get this thing to work. We knew it wasn’t going to, we knew it was a temporary thing, and we went on set in front of Sigourney Weaver and did six takes – with each take it did less, with each take something else would break.

Sigourney thought it was great because she thought it was meant to be malfunctioning anyway, but Fincher went through the roof. We knew that was going to be the first effect shot and we knew it was a pile of shit and Fincher was very, very worried that everything else wasn’t going to work either. He balled us out quite often; when we took something on set for the first time, he’d say, ‘What the hell is this? It looks like a joke.’

I suppose you can’t really blame him, you’ve got to blame the people who want to make a film without having a script to start with. You’ve got to blame Sigourney Weaver to a certain extent, too, for having too many fingers in the pie. From what I was told she had a lot to do with the script; she was the one who didn’t want there to be any guns in the film, she was the one who decided to have the love scene. There was no reason for it other than she decided Ripley had to get into bed with someone.

At the end of the film, there were still lots of shots that hadn’t been done, with all the things that had been left out being vitally important to the story. In fact, from where I was standing, at one point it looked as though they were seriously thinking about writing the whole thing off.

Perhaps that would have been for the best…

For another peek behind Alien 3’s curtain, I highly suggest reading Ralph Brown’s account of his time filming the role of Aaron ’85’ at his blog here.

Leave a Reply to Paul B Cancel reply