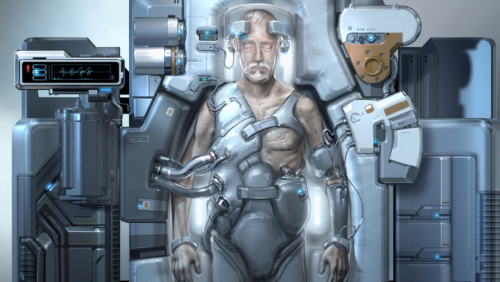 Concept of the sickly, slumbering Weyland.

Weyland is a name uttered numerously throughout the Alien series. Until Prometheus, the name has been anonymous, faceless. When we are introduced to the Nostromo and its crew in 2122, Weyland is less of a man, and rather one part of an empire that is only ever referred to metonymically: it is “the Company,” an organisation stretching throughout space; terraforming worlds, financing colonies, paving trade routes, hauling ore – it is large, hungry, paranoid, impersonal, all-consuming and ever-expanding. And it all began with one man, born in Mumbai, India, at the closing of the 20th century…

Prodigious, driven, vainglorious, stentorian and elegant in manner, Weyland is the vanguard of technological progression in the 21st century – and hopes to play the same important role into the 22nd. “He’s the billionaire megalomaniac,” said Guy Pearce of his character. “He’s a man who thinks outside of the square; a lot of people do that in life, but a lot of people don’t have the facility or the finance to actually be able to act on that.”

“He’s somebody who is financing these missions,” Pearce also told Collider in 2012, “and is also somebody who has a vision of humanity and the world and technology.” For the role, Ridley “referenced Rupert Murdock,” according to Pearce, “really not as a personality, but more just as somebody who has an empire, really. Even [Richard] Branson he referenced and obviously Branson is a totally different personality. So as I say, not a personality reference, but really just these kind of guys who have built and built and it just sort of seems endless, and really I mean when you think about it Peter Weyland is far beyond what those two guys are combined at this stage, [he’s] a multi-trillionaire.” 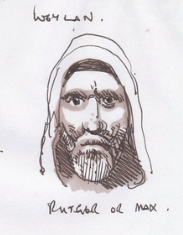 Ridley’s sketch of Weyland. “Rutger or Max,” it reads. Rutger Hauer and Max von Sydow were originally considered for the role. In another nod to Rutger, one of Weyland’s security personel was to be named Batty, after Roy of Blade Runner fame.

Weyland was present in Jon Spaiht’s initial drafts, but only featured in the film’s beginning. Shaw (named Watts) and Holloway travelled to meet Weyland aboard an orbital colony to propose the Prometheus mission. In a later draft, they visit him at his offices on Mars, which is undergoing terraforming. In Weyland’s place aboard the Prometheus ship (the Magellan, in earlier drafts) is a hidden squad of Company soldiers. When Damon Lindelof came aboard Weyland took a more prominent role; seeking immortality by finding and appealing to the gods.

“Peter vs. Charles: [Ridley] wanted to use Weyland as a conduit in the story,” explained Damon Lindelof, “and was not at all interested when I said, ‘You know, Weyland was a character in one of the Alien vs. Predator movies.’ He just sort of looked at me like I had just slapped him in the face. That was the beginning, middle, and end of all Alien vs. Predator references in our story process.”

Lindelof also made other changes to Weyland, and temporarily changed his forename to Arthur – an alteration that obviously did not stick.

Having to don prosthetics to play the aged Weyland, Pearce also commented, “I did think, ‘Why didn’t he just cast Ian McKellan?'”

“I was so happy to get him [Pearce],” said Ridley, “the guy can play anything, and why not have [him play] a seriously intelligent genius, a man who’s kind of a combination of Eddison, Bill Gates and Steve Jobs?” Ridley further explained that having the young Guy Pearce play the old Peter Weyland would give the character a youthful, hungry energy.

Pearce continued: “The difficult thing about playing someone who is a lot older than yourself is that people know how old I am, they know what I look like, so there’s always gonna be scrutiny anyway … It was important for [Ridley] to find someone who had a kind of youthful quality, I suppose.”

Originally, it was planned to see both a young and old Weyland in the film. Young Weyland would appear in one of older Weyland’s cryo-dreams – where his consciousness resides during the trip. Pearce explained the excised sequence: “David comes to see me at one point basically to say, ‘we’re nearly there, but not quite yet, sir.’ And I basically say to him, ‘well, don’t wake me up until we’re ready to go, until you’ve discovered what it is I want you to discover.’ And so we find Weyland living in this fantasy world of being on a yacht in this fabulous kind of, perhaps Caribbean or tropical setting, with lovely, luscious women around him, all tanned and looking fabulous, and basically just sort of re-living the life that he would if he could,” (in the pre-viz artwork, young Weyland is depicted as a young Kirk Douglas.)

Here is the scene as scripted by Damon Lindelof:

A WHITE SKY — BLINDINGLY SO. TILTING DOWN TO FIND — WATER. AZURE BLUE. Striking. WAVE roll gently onto the beach as A PAIR OF WORK BOOTS splash through the surf. It’s DAVID. In his jumpsuit and SUNGLASSES. Wait… WHERE the hell are we right now? But now our attention goes to a SOUND — A REVVING MOTOR. David looks out at the water as — A WAVERUNNER zips across the ocean — BLASTING TOWARDS THE SHORE — CUTS to a SUDDEN STOP revealing its DRIVER —

A STUNNING WOMAN IN AN EQUALLY STUNNING BIKINI. She smiles at David, everything about her just oozes SEX —

BIKINI: You here to see him?

A seductive grin as the woman nods to behind her —

BIKINI: Then hop on.

David nods, splashing knee deep into the water as we CUT TO:

The waverunner JAMS across the water. A surreal sight — David in his jumpsuit. Arms wrapped around the glorious bare midriff of the WOMAN. DROPPING BEHIND them to FIND –They’re approaching a MAGNIFICENT YACHT. And we CUT TO:

David CLIMBS up a ladder, steps onto the DECK of the Yacht. Walks along it until he reaches — A CABANA. FIVE BEAUTIFUL (and scantily clad) WOMEN, all but feeding grapes to — A HANDSOME MAN. Virile. Mid-Thirties. Oddly FAMILIAR. He looks over as David approaches. SIGHS theatrically —

HANDSOME MAN: And so the dream comes to an end.

And while we’re not exactly sure what this man is TALKING about, David sure does. He SMILES —

Oh. THAT’S why he’s so familiar. This is OLD MAN WEYLAND…. except he’s about sixty years YOUNGER. HOW that is, we’ll figure out later, but for now —

WEYLAND: I gather you’ve come to take me back?

WEYLAND: Then why are you here, David?

DAVID: I’m here to tell you that things haven’t exactly turned out the way we hoped, sir.

Weyland absorbs that. Just looks at David. This is a man who gets what he wants. Always. ANGER now —

WEYLAND: You were instructed not to disturb me unless you had what I came for, you useless shit.

DAVID: What you came for isn’t here, Mr. Weyland. At least not in the way you had hoped. So I’ve been forced to… (how to put this?) Experiment.

And JESUS. We can’t help but think David just may be talking about HOLLOWAY. Weyland smiles at his man-made son like a proud FATHER —

WEYLAND: That’s what I love about you, David… Never say die.

Now Weyland steps forward, puts his hand on David’s shoulder. Not without affection. We finally see the OLD SOUL in this young body… and it seems SCARED.

WEYLAND: Once I leave this place, I won’t have much time. (beat; measured.) Don’t come back here until you’ve found what I need. 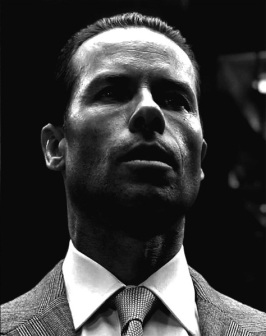 Tagged as the Company, Weyland