“This is a movie about alien interspecies rape, that’s it. That’s scary. That’s scary because it hits all of our buttons, all of our unresolved feelings about sexuality, all of them.”
~ Dan O’Bannon, Alien Evolution, 2001.

Lambert’s final scene is probably Alien‘s greatest source of horror and shock, bar Kane’s last supper. It is also one of the film’s most speculative scenes: what sort of experience did the Alien subject her to, exactly? Was it sexual as well as violent? Was it literally sexual, or merely figuratively? Alien fan boards have seen the topic being raised and fought over for years – did the Alien rape Lambert?

The answer is not something we can turn to the scripts for. The scene was completely improvised in post-production. Veronica Cartwright, who plays Lambert, knew nothing of the Alien’s suggestive actions until she saw the movie upon release. “[Lambert’s death] was supposed to be done different,” she told Fantastic Films magazine in 1979, “but they ran out of time so they changed it. Ridley wanted to do a thing where I freak out and crowded back into one of those lockers that the cat came out of. I sort of crawl up into it and die of fright. But that got changed.”

She also told Starlog that she “was supposed to sneak along the wall and get into the locker – the same one the cat was in earlier. The Alien is supposed to track me down with his sensory things and I die of fright. Well, that’s what they told me, but the next thing is I’m hanging from a meat hook.”

Gathering from Cartwright’s quote, we can deduce that the shots of Lambert crawling into the storage locker and seizing up was not filmed due to time concerns, and Ridley worked his way around it in post (Cartwright herself said in 2013 that they never shot her final scenes, only the footage of her being suspended so the viewer can see her dangling legs). Scott took her dying screams and distorted them , then took an excised clip from Brett’s death and spliced it into Lambert’s. The rest is for the imagination to squirm over.

The Many Deaths of a Navigator: Lambert suffered a myriad of alternating deaths throughout Alien‘s scripting phase. In O’Bannon’s script, Melkonis, the character who most resembles Lambert, has his head twisted and wrenched off by the Alien. In an early Giler and Hill draft, the cocooned Dallas tells Ripley that the Alien has eaten Lambert. In later scripts, Lambert is at one point set alight by Parker, who is aiming for the Alien with his flamethrower, and in another version is sucked through a hole in the ship’s hull.

“Because of budget reasons and time we just couldn’t shoot it,” said Scott, “but I wanted Lambert to get sucked out of the ship through an opening about the size of a keyhole. Not a very heroic ending – but dramatic.” Scott added, in an interview with Cinefantastique Online, that economics also played a part in excising the death sequence: “We couldn’t afford it, besides, I couldn’t work out in those days [without CGI] how to squeeze a body through a hole that big.”

For the immolation sequence, Scott said in 1979, “as the script was reworked, and as we shot the film, other scenes that were equally powerful [as the chestburster], such as the air-lock depressurisation, the flamethrower death of Parker and Lambert, and the cocoon scene with Dallas were cut altogether or changed.”

“When I saw the final cut it was a lot different than I had anticipated,” said Cartwright. “For example, the scene where the tail creeps up between my legs, those were Harry Dean Stanton’s legs. He was the first one to go, so the Alien’s tail came up and pulled him closer to inspect him. Then –whack– it drags him up into the rafters. And so when I was watching the movie I realized, ‘those aren’t my legs!’ It was really weird. Who knows what will end up being changed in the editing room.” One giveaway that the legs are not Lambert’s is that the feet wear sneakers – Lambert wears cowboy boots throughout the entirety of the film. 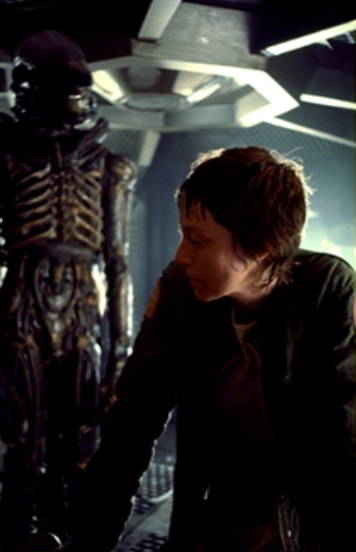 “She was the one who first expressed the fears that most people might have. And when Lambert saw the Alien, she freaked out. I mean most people in that situation would – it’s not the nicest thing in the world to stand next to. Plus, I figured when I was working on her, that this was her last trip and she was on her way home. And I worked to the effect that she had an experience before that wasn’t too pleasant. I mean getting hit in the face with the blood wasn’t too pleasant either. It sort of sent her over the end a little.”
~ Veronica Cartwright, Fantastic Films, 1979.

Lambert still ultimately dying of fright however is still suggested by Ridley Scott in his 2003 commentary, where he notes: “Veronica was always great at barely controlled terror. Catatonic terror. She’s always like, two steps from a heart attack, which I think she finally does at the end – have a heart attack.”

In a separate interview with Danny Peary in 1984, Scott said: “You’d probably die before the thing touched you anyway. I mean, you’d have a heart attack, right? You’d turn and see it and last about four seconds before you had a coronary, okay … run-ins with the Alien [were] always done with the ultimate feeling of a heart attack. The rush of a heart attack, even if the thing didn’t ever touch them.”

Let’s note that Cartwright herself told Starlog that “All I can assume is: I got raped by the Alien.” She explained that “There were many things that were shot which aren’t in the final movie. I thought events would take a different direction than they actually did in Alien. And that surprised me.” 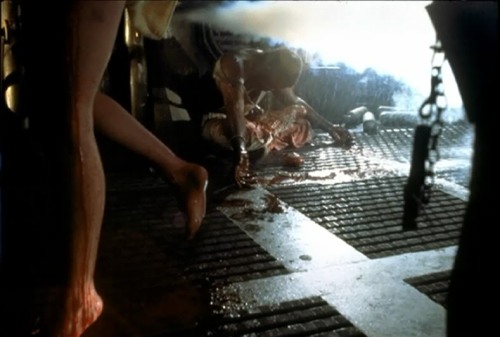 “Well, originally my death was meant to take place in one of the lockers. I was supposed to crawl into the lockers like the cat … We shot for five days … Well, somebody asked me once, ‘how did it feel for that tail to go up between your legs’, but those were Harry Dean Stanton’s legs. If you notice I wear cowboy boots throughout the movie. But that was the end result – we never did shoot my death, so, what I thought was going to happen -getting caught up inside that locker- was never shot. I asked them what was going to happen, they said they had enough footage. And the next thing I’m in a week later and I was hanging from a jockstrap contraption for a couple of hours, just so they could see my foot dangling and then they decided that was what my death would be.”
~ Veronica Cartwright, Texas Frightmare Convention, 2013.

It seems absurd to suggest that the Alien physically rapes or sexually penetrates Lambert, considering that, one: the kill sequence lasts mere moments, with the Alien gone once Ripley arrives at the scene, and two: the Alien has no penis, and in fact sports a vulva-like protrusion on its groin, (the creature is hermaphroditic). So we are left, arguably, with a form of symbolic rape, or the creature penetrating Lambert’s body with its tail, and/or Lambert’s heart succumbing to her terror during the ordeal. Perhaps Lambert suffered a massive heart attack just as the Alien reaches out for her, or as it grooms her body. Of course, one point to muse over is the state of Lambert’s corpse, as found by Ripley, in a suggestive state of undress… 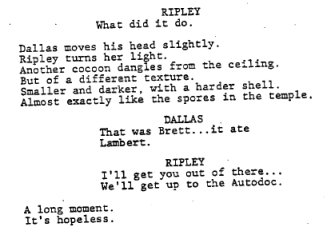 Extract from one of the earliest Giler/Hill drafts. When Ripley rushes to Lambert’s screams, the navigator is nowhere to be found. Upon stumbling inside the nest, a near catatonic Dallas reveals her fate.