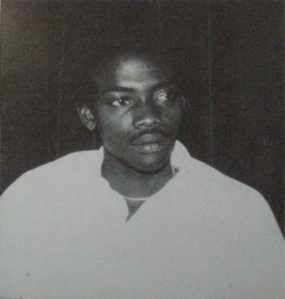 Originally published in the Autumn 1979 issue of Cinefantastique magazine, this is Alien actor Bolaji Badejo’s only interview. So far as I know, it’s not been available online anywhere else until now, and is reproduced here courtesy of Cinefantastique.

The Alien you don’t get to see in ALIEN was played by 6″10, 26-year-old Nigerian Bolaji Badejo. Bolaji is a student of graphic arts in London, and has travelled extensively with his parents: to Ethiopia where he studied fine arts; and to the United States, including a three year stay in San Francisco. He landed the role of “The Alien” purely by accident, a turn of events that reads like a publicity agent’s tall tale. The production had apparently put out a casting call for a very tall, very thin actor. Bolaji bumped into agent Peter Archer while having a drink in a London West End pub. Archer thought of ALIEN as soon as he spotted Bolaji, and offered him the chance to try out for the part.

“As soon as I walked in,” said Bolaji, “Ridley Scott knew he’d found the right person.” Scott had been looking at basketball players, and had tested Peter Mayhew [Star Wars‘ Chewbacca] for the Alien, but it was Badejo’s combination of height, slimness and an erect posture that cinched him the part. Bolaji was signed for the part in May, manufacture of the suit began, and the filming of the Alien scenes started in August at Shepperton.

Ridley Scott originally intended Bolaji to be part of a team of three artists needed to play the Alien, including a mime specialist and a karate expert. When other experts of Bolaji’s unique proportions could not be found, a stuntman was substituted for the dangerous and physically grueling action and Bolaji began to take miming lessons. Most of the footage shot of the Alien didn’t work, but there is one brief cut of Bolaji going through one of his miming routines in the suit, in the sequence where he attacks Veronica Cartwright. “The idea,” says Bolaji, “was that the creature was supposed to be graceful as well as vicious, requiring slow, deliberate movements. But there was some action I had to do pretty quick. I remember having to kick Yaphet Kotto, throw him against the wall, and rush up to him. Veronica Cartwright was really terrified. After I fling Yaphet Kotto back with my tail, I turn to go after her, there’s blood in my mouth, and she was incredible. It wasn’t acting. She was scared.” 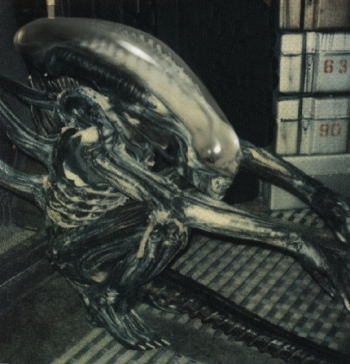 At rest on set.

Bolaji worked approximately four months on the film, through final shooting at Shepperton in November. He usually worked only three or four days in the week, sometimes on weekends, and kept getting called back to redo shots when the action didn’t work. “They’d say, ‘Come back and do this shot again,’ but when you get there they’d want you to do something else. New ideas were always coming into their heads.”

Only Bolaji and HR Giger were allowed to watch the rushes of the Alien footage with Ridley Scott, so they could work out problems together on how best to show the Alien and represent the movements and actions required. Most of the footage Bolaji filmed never made it into the movie, due to problems.

“Ridley had a lot more ideas than what you see on the screen, but some things were impossible. There was one part where I was hanging from a wire about ten or fifteen feet above the ground, and I curled up. I was like a coccoon of my own, and I come out very slowly and stretch out. But I couldn’t do it. I was held up by a harness around my stomach, and I was suffocating trying to make these movements.”

Scott filmed several variations of his concept of the monster descending from above onto Harry Dean Stanton, but none of them worked. In one set-up, Badejo was strapped onto a large see-saw like boom arm that could be raised from the ground to tilt straight up some 20 feet in the air. When it came down full circle, Bolaji was upside down, with blood just rushing to his head, feeling very dizzy. Enough was enough! Bolaji declined to repeat the stunt, so Scott got the stuntman to try it, but he fainted! Eventually, Scott rigged the boom arm with a dummy suit and tried to film the same action, but it wouldn’t work without a host to animate the Alien’s movements. Scott filmed some footage of the stuntman being lowered head-first on wires, picking up another stuntman doubling for Harry Dean Stanton, and whisking him back up to the ceiling of the ship, out of frame. In the end, Scott was forced to resort to closeups and quick cuts to suggest the action of the sequence.

HR Giger made the Alien suits worn by Bolaji and the stuntman out of latex, at a cost of more than $250,000. The suit consisted of some ten to fifteen separate pieces, worn over a one-piece black body suit, needed underneath to disguise the fact that the Alien fitted together in sections, and because you could see through parts of it, like the ribcage. The ribcage was put on like a sweater, over the head. The legs and hips were put on separately as sleeves, fitted over with gloves for the hands. The tail was attached separately and operated by a series of wires. Feet were worn like shoes. The head was placed on last. Bolaji likened wearing it to having your head stuck up the middle of a huge banana.

“The Nostromo set itself was only about 6’6 high. I’m 6’10, 7′ with the suit on. I had to be very careful how I spun around or did anything. It was terribly hot, especially the head. I could only have it on for about fifteen or twenty minutes at a time. When I took it off, my head would be soaked.”

In addition to the non-mechanical head for actions scenes, Bolaji wore Carlo Rambaldi’s articulated head for special effects shots. “It was all manual, remote controlled,” said Bolaji. “There’s still a space in it for my head. I had it on just to make sure nothing goes wrong with the posture of the head or how tall it is in comparison to the other sequences. They must have had about 2000 tubes of K-Y Jelly,” he laughed, “just to get the effect of that slime coming out of his mouth. A lot of it was spread around on the face. I could barely see what was going on around me, except when I was in a stationary position, while they were filming. Then there were a few holes I could look through.”

Crawling out of the Narcissus’ compartments was particularly difficult for Badejo.

Bolaji only wore the suit for sequences in which the Alien’s full body would be on view. For sequences where just an arm or part of the body was needed, anyone could double as the Alien by donning part of the suit. Bolaji, for instance, did not play the scene with Tom Skerritt inside the Nostromo’s cramped ventilation shaft, where only part of the creature’s crouched body is visible. For some sequences a dummy in the suit was used, such as the climax where the Alien is sucked out of the shuttlecraft and fried by the ship’s jet exhaust.

The shuttlecraft sequences at the end of the film were some of the most interesting and difficult for Bolaji, and provided most of the useable Alien footage. Climbing into the cramped shuttlecraft bulkhead and then out again for each take put a lot of strain on the suit, which kept splitting.

“Bursting out of that compartment wasn’t easy,” exclaims Bolaji. “I must’ve ripped the suit two or three times coming out, and each time I’d climb down, the tail would rip off! But it wasn’t much of a problem for them, because they had more suits. I remember I had to repeat that action for about fifteen takes. Finally, I said, ‘No more!’ There was a lot of smoke, it was hard to breathe, and it was terribly hot.”

Bolaji regrets that no one can recognise him as the Alien in the film, but thinking back on Boris Karloff, Christopher Lee, or other successful actors who began their careers by playing grotesque monsters, he adds, “The fact that I played the part of the Alien, for me, that’s good enough. Legally, I’ll be given the opportunity of doing a follow-up, if there is one.” Although he is training for a career on graphic design and commercial art, he exclaims, “Not if a film comes along!”